I was intrigued by news of a “glass floor” at the Tower Bridge Museum here in London and visited this weekend for the first time.  The glass floor did indeed measure up to expectations.  It runs down the middle of the western walkway that joins the tops of the two towers of the bridge, and will soon be joined by an identical floor in the eastern walkway.  It reveals superb views of the road and walkways far below as can be seen from the photo and is more than high enough to induce feelings of vertigo in those who are susceptible to it.

The walkways are only one part of the Tower Bridge Museum, however, and the other displays, while interesting, are looking a little tired.  The visit begins with a lift ride to the upper walkway level, followed by a short introductory film featuring Queen Victoria and the engineers who designed and built the bridge late in the 19th century.  Next up is a stroll along the walkway, with colourful photos of other bridges from around the world on the left and panels describing aspects of the design and construction of the bridge on the right.  There are good views out to the Thames both upstream and down. 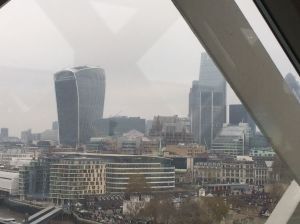 You then walk down a few steps to a lift which takes you back to the main bridge level, followed by a short to the “Engine Rooms”, which contain the machinery that was used to raise the central leaves of the bridge in its early days.  The bridge was once raised many times a day, with the upper walkways presumably used by pedestrians to make their way across the river while ships were passing through.  The machinery is beautifully painted and pistons slide back and forth.  The explanatory signs (which are in English plus four or five other languages) are rather rudimentary, however, and it is not easy to follow exactly how the machinery worked.  More detailed explanations would be appreciated.

The visit then concludes with the shop and you are then back out onto the bridge again.

The staff who help you along your way and up and down the lifts are well trained, friendly and helpful.

I would hope that the addition of the glass floors on the upper walkways is the start of a thoroughgoing updating of the Museum.  The glass floors add a “wow” factor to what would otherwise be a rather pedestrian account of the construction and operation of the bridge.  The exhibits could do with updating and more modern display formats (as at the refurbished Imperial War Museum), while the premises need a lick of paint and some refurbishment.  A posh cafe positioned to take advantage of some of the view would also help.  The Museum is nonetheless well worth visiting as it is (for the £9 entry fee) see the website here: http://www.towerbridge.org.uk/

Like Loading...
‹ The Pope is unkind to grandmothers, but he has lessons for us all
Medical Museums in London ›